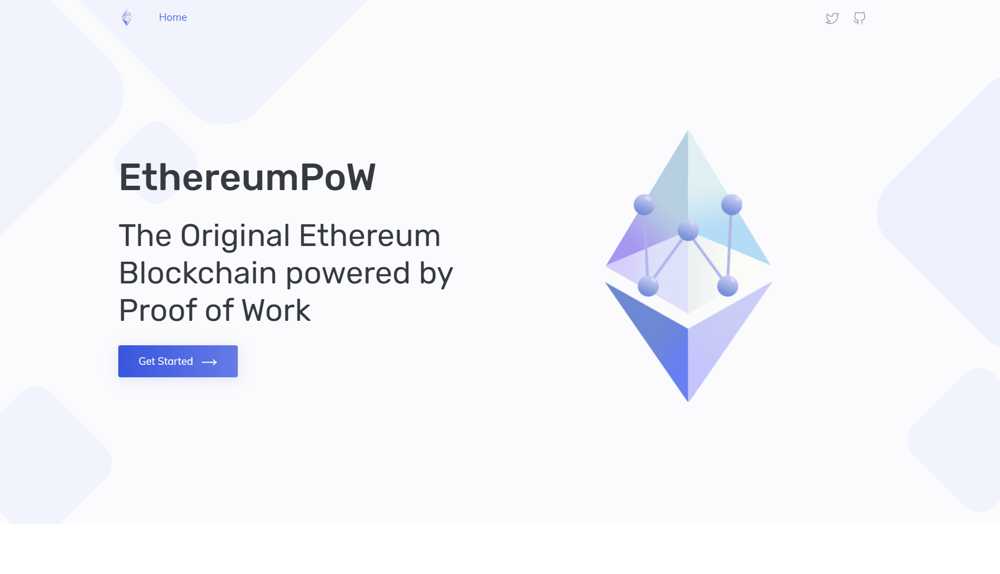 Proof-of-Work and Proof-of-Stake are the most popular consensus mechanisms in the blockchain industry. Proof-of-work is best known for its security measures whereas proof-of-stake is widely known for its efficiency and adaptability. However, the majority believes that PoS boasts more benefits compared to PoW.

Ethereum was in the final phases of transitioning into the PoS mechanism when a group of miners announced that they would stick to the PoW mechanism. Thus, the EthereumPoW was introduced.

Bitcoin and Ethereum kept using the PoW mechanism for a long time. But Ethereum decided to transition to the PoS to improve its overall performance because Ethereum is one of the leading platforms for smart contracts and decentralized finance.

It’s important to understand the Ethereum network to get an idea of EthereumPoW. Ethereum is a decentralized blockchain network introduced by Vitalik Buterin in 2015. The network became widely popular when it started providing support for smart contracts.

Thus, it enabled developers to build new cryptocurrencies without having to create a new blockchain network from scratch.

The team raised around $150 million for this project. However, $60 million worth of Ethereum tokens were drained as a result of a hack. The Ethereum community decided to split the network into two separate chains. Thus, the new Ethereum was introduced whereas the original network became Ethereum Classic.

Ethereum team recognized the importance of the PoS consensus mechanism and they decided to transition into the new consensus protocol. The team has made several updates since 2020 that are a part of the Ethereum 2.0 project. The goal was to reduce energy consumption because Ethereum is the leading smart contract-capable platform.

Ethereum network transitioned into a Proof-of-stake consensus mechanism in September 2022. The team has also decided to use sharding technology to complete the validation process on smaller chains. Thus, it can now offer faster transaction speed with affordable rates.

These miners were primarily concerned about their earnings because they thought they won’t be able to make more money from the PoS protocol. The miners have spent a huge amount to buy the mining rigs. So, they weren’t ready to lose their investments. EhtereumPoW will allow them to continue making money with their existing setup.

But they will now earn ETHW instead of ETH. ETHW coin is already registered on a number of popular crypto exchanges including Poloniex, MEXC, Phemex, DigiFinex, Gate.io, and CoinW. It will be available on other exchanges as the platform grows. TRON founder Justin Sun and ETH miner Chandler Guo are the leading names who supported this fork.

The miners spent around $19 billion to purchase GPUs (Graphics Processing Units) for Ethereum mining. These mining rigs will become useless if Ethereum transitions into a proof-of-stake protocol because the miners can’t use them for Bitcoin mining as Bitcoin uses ASICs.

Moreover, the PoW is considered more reliable and secure as compared to PoS. Vitalik Buterin suggested that the PoW supporters can shift to Ethereum Classic but the miners disagreed with the arguments that ETC isn’t a sufficient alternative to ETH. They also claimed that ETC doesn’t have a reliable ecosystem.

Why is EthereumPoW Popular?

Surprisingly EthereumPoW became quite popular within a short span of time as compared to other hard forks of the blockchain industry. The hard fork was welcomed by the miners who wanted to earn from blockchain mining.

Research shows that ETHW miners earned around $18 billion through mining in 2021 which is $1 billion higher than Bitcoin’s returns. The miners weren’t ready to quit such an amazing platform because they had invested a huge amount in mining equipment.

The ETHW community has introduced airdrops to attract more users to the network. Bitget, a leading crypto copy trading platform, distributed 5,000 free ETHW tokens among its users during the merge. The campaign lasted for the first two weeks of September 2022.

Crypto.com has also announced that it will airdrop ETHW tokens among the users who meet the criteria. Binance introduced the ETHW mining service by the end of September 2022 which will allow users to mine ETHW tokens for free. Thus, the price of ETHW surprisingly increased.

EthereumPoW has little to no Defi activity because leading stablecoins like USDT and USDC haven’t provided any support for this platform. The critics claim that the project is only introduced to trap small investors.

Many miners have already migrated to other networks because there isn’t enough activity on this platform. And the remaining miners will also be forced to leave the platform if it couldn’t maintain interest and value.

ETHW is the native token of EthereumPoW. The miners receive as a reward for validating the transactions. With a circulating supply of 107 million tokens, ETHW has a market cap of $357 million. It ranks among the 100 best cryptocurrencies in terms of market cap.

EthereumPoW is a hard fork of Ethereum that was introduced following the transition of Ethereum into the PoS mechanism. The hard fork was supported by miners who put their trust in the PoW mechanism. It was widely welcomed by miners but now it’s facing a few problems due to lack of defi activity.

If you need more information about EthereumPow, feel free to get in touch with us.