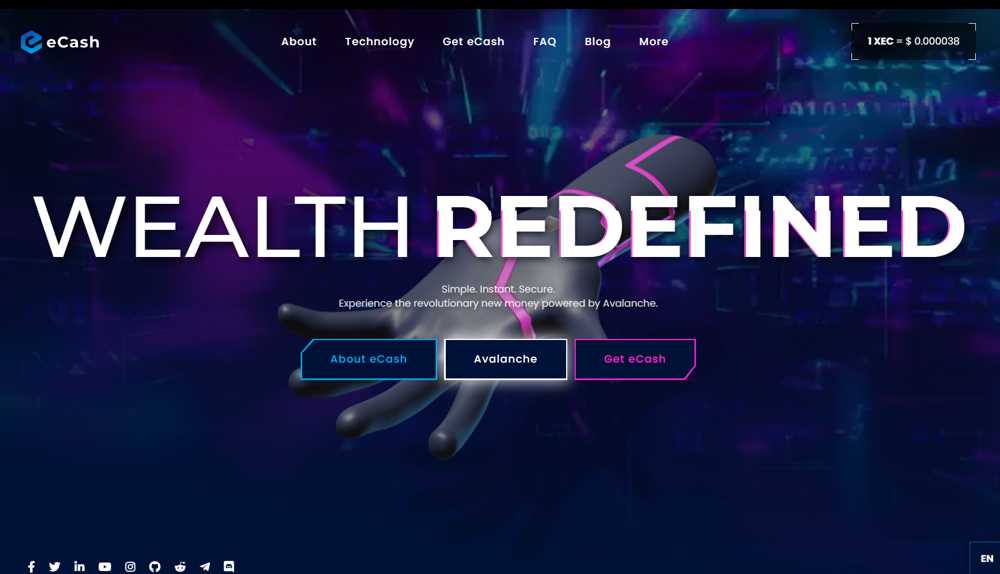 Bitcoin has proved to be an effective solution to traditional financing over the years. But it has a few flaws that need to be fixed. The developers have introduced several unique blockchain projects to fix these problems. Some developers have also introduced the hard forks of the Bitcoin network to provide better transaction solutions to users.

eCash is also a rebranded version of the Bitcoin fork that was called Bitcoin Cash ABC.

eCash is a blockchain protocol that processes transactions faster than the Bitcoin network. Its transaction fee is also lower than other blockchain networks. The users can also build smart contracts and decentralized applications on this network to take advantage of blockchain technology.

The primary goal of the eCash network is to ensure users’ privacy while allowing them to complete international transactions swiftly. eCash provides a smart contract facility by connecting to an Ethereum Virtual Machine (EVM) subchain. It means that the developers can easily transfer their decentralized apps to the eCash network without having to reconfigure them.

eCash uses a user-friendly structure and format so that investors can make well-informed decisions. eCash is trying to fix several problems that are found in the existing blockchain networks.

Although some hard forks prove to be quite effective for blockchain networks, some may severely damage the reputation of the primary currency for a longer period. The investors don’t feel secure with such kinds of advancements.

eCash uses a combination of Avalanche post-consensus mechanisms and different advanced security protocols to avoid the hard forks. Thus, it introduces a unique structure that can be upgraded with time.

The higher gas fee is one of the leading problems of Bitcoin and other blockchain networks. The users are required to pay a higher gas fee depending on the number of transactions queued already. The users can get their transactions processed earlier by adding more gas fees. It ultimately creates problems for average users who want to transfer funds from one wallet to another.

It also prevents businesses from using blockchain networks because they can’t entertain more customers with this mechanism. Thanks to the eCash network that is now trying to solve this problem through lower gas fees. eCash uses a proof-of-stake consensus mechanism to quickly process transactions.

The main goal of blockchain technology was to provide an environment to users where they can transfer funds without disclosing any details to the local governments or other authorities. But many networks have now compromised on their goals while trying to appease the regulators.

It has eventually damaged the trust and confidence of retail investors. eCash uses zero-knowledge subchains to provide higher standards of privacy.

eCash was introduced as the Bitcoin blockchain fork in late October. It was recognized as Bitcoin Cash ABC at that time. However, the community members realized that they can’t properly address the users’ concerns through a hard fork. Therefore, they rebranded the project to eCash in July 2021.

eCash started working on several privacy features in August 2021 and some of those features are still under development. eCash is also dedicated to resolving the scalability issue. Currently, it can process 100 transactions per second which are a lot better than the first and second-generation blockchain networks.

But the community members want to increase its capacity to five million transactions per second.

How Does eCash Work?

Avalanche is the most important feature of eCash. It enables users to become a part of the validation process without having to install expensive mining rigs. With Avalanche, the block size of the network can be increased to as much as 1TB. On the contrary, Bitcoin’s block size is just 1MB.

eCash enables users to generate passive income through staking. Staking proves to be a more profitable option than trading because investors can earn consistent returns on their investments by locking their XEC tokens. It ultimately increases the security of the network because more participants are involved in the validation process.

XEC token holders also have governance rights within the platform. They can create proposals for the development of the network. All the token holders then vote for these proposals. The voting power is determined based on the tokens available in the users’ accounts.

The development team is required to implement the changes once the proposal has passed the voting process.

XEC is the native token of the eCash network that is used to pay transaction fees. The users can also stake their XEC tokens to earn passive income. Moreover, the XEC token provides voting rights to the holders within the platform. With a circulating supply of 19 trillion tokens, XEC has a market cap of $736 million.

It has a total supply of 21 trillion tokens that will be released in the form of rewards.

eCash is a blockchain network that is designed to solve the scalability and high transaction fee problems. It uses a proof of stake consensus mechanism to complete the transactions faster than other networks. It also incorporates the Ethereum Virtual Machine subchain to provide a better environment for smart contract holders.

If you need more information about how eCash works, feel free to get in touch with us.