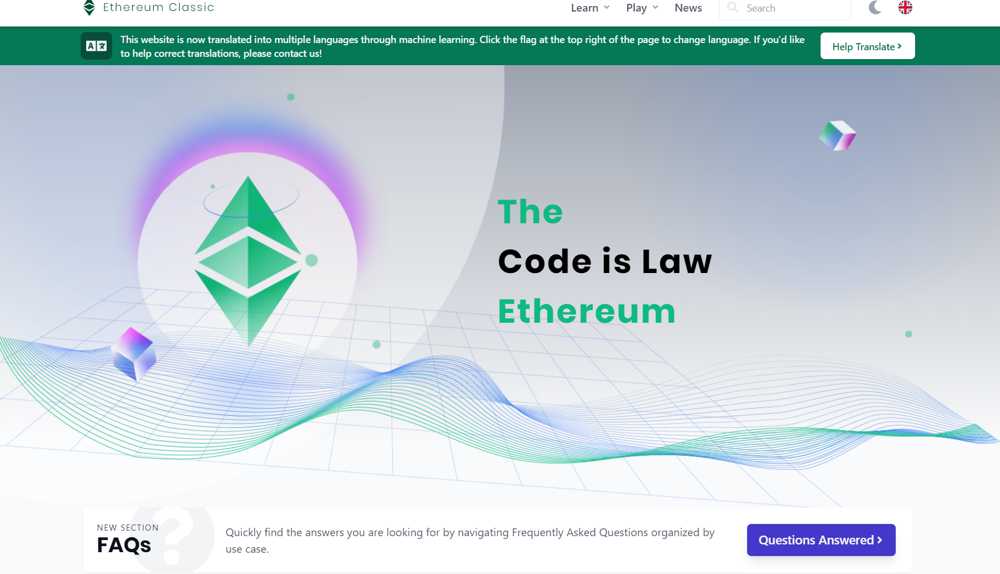 The reputation of Ethereum was affected when millions of dollars worth of Ether (ETH) were stolen from an Ethereum-based Decentralized Autonomous Organization (DAO) in 2016. The hard fork was used as a solution to reverse the hack. But the community got split into two groups for having different opinions. Therefore, ETC and ETH have now considered two different projects.

What is Ethereum Classic (ETC)?

Ethereum Classic is a smart contract platform that shares most of its features with Ethereum. It means it doesn’t only facilitate decentralized transactions but also enables developers to build decentralized apps on its network. The users can also build smart contracts on this blockchain to exchange money, property, and other assets without having to deal with a centralized authority.

The users can also launch their tokens and NFTs on this network. Most people may not know that Ethereum Classic is the original blockchain that was launched in 2015. It means it still contains information about the hack that was carried out in 2016. On the contrary, the details of the hack were removed from the Ethereum network like it never happened.

Ethereum Classic is the original network launched by Vitalik Buterin in 2015. The network became popular because of the vast number of initial coin offerings conducted through this network. Decentralized Autonomous Organization (DAO) was one of the most popular launches on the Ethereum Network.

The DAO had its own tokens that could be interchanged with ETH to execute the smart contracts. This project raised more than 11 million ETH tokens within a short span of time. But it got hacked because of a bug in its network.

At this time, the Ethereum community got split into two groups. One group wanted to reverse the actions so that the investors could get their money back but the second group believed in maintaining the integrity of the blockchain network by avoiding tampering.

However, the first group won because it had the support of Vitalik Buterin and other big players. Also, 97% of the community supported this opinion. Thus, the Ethereum blockchain was divided into two separate networks as a result of a hard fork. The new network was recognized as Ethereum whereas the original blockchain was named Ethereum Classic (ETC).

ETC initially had an unlimited supply but the community agreed upon setting a maximum supply of 210 million tokens in 2017. Moreover, the team started using “MESS” in 2020 to protect the network from potential attacks.

The basic difference is well known to most people that ETH is widely accepted among the crypto community as compared to ETC. The major reason is that Vitalik Buterin, the founder of this blockchain network, supports Ethereum. However, there are a few technical factors that differentiate between these projects.

One of the major differences is that the Ethereum team is working on moving to the Proof-of-Stake consensus protocol as it consumes less energy. Whereas the Ethereum Classic is dedicated to sticking to the traditional mining process.

Ethereum Classic has a maximum supply of around 210 million tokens while Ethereum doesn’t have a maximum supply. However, the rewarding system for both networks is the same.

Furthermore, Ethereum has the support of the Enterprise Ethereum Alliance, a group of 200+ companies like Intel, VMWare, Microsoft, JP Morgan Chase, CitiBank, and more, that contribute to the consistent growth of the network.

How Does Ethereum Classic Work?

Like Ethereum, ETC runs through the Proof-of-Stake consensus protocol. It means the miners can install the software on their mining setup to validate the transactions. The miners get to earn a small amount of ETC tokens for validating the transaction.

The users can transfer money to one another without having to deal with a centralized authority. They can also create smart contracts on this network. A smart contract is an agreement between two parties that automatically executes once the terms of the agreement are met.

Furthermore, the developers can build decentralized apps on this network or they can launch their own decentralized tokens for trading. However, Ethereum Classic isn’t as popular as Ethereum due to which it’s more vulnerable. It’s an important reason why the community has economically made the risk of 51% attacks non-viable.

What Are the Use Cases of ETC?

ETC is the native token of Ethereum Classic that can be used for several purposes within the network. With a circulating supply of 134.7 million tokens, ETC has a market cap of $3.3 billion. It has a maximum supply of 210.7 million tokens that will be released over the years.

Gas Fee – Gas fee is the most common use of ETC tokens on the network. The users need to pay a small percentage of the total transaction as gas fees. A small portion of the gas fee is transferred to the miners for validating the transaction.

Purchases – The users can purchase products and services from decentralized apps using ETC tokens. The developers can also use a native token for their app but most apps use the ETC tokens for transactions.

Swap Tokens – The users can use this token to swap tokens on the decentralized exchanges that are established on the network.

Ethereum Classic is the original Ethereum blockchain that was introduced in 2015. The blockchain was separated into two parts due to a hacking event in 2016. The part that contains the complete data of transactions is called Ethereum Classic while the other part is known as Ethereum. Feel free to get in touch with us if you need more information about how the Ethereum Classic network works.