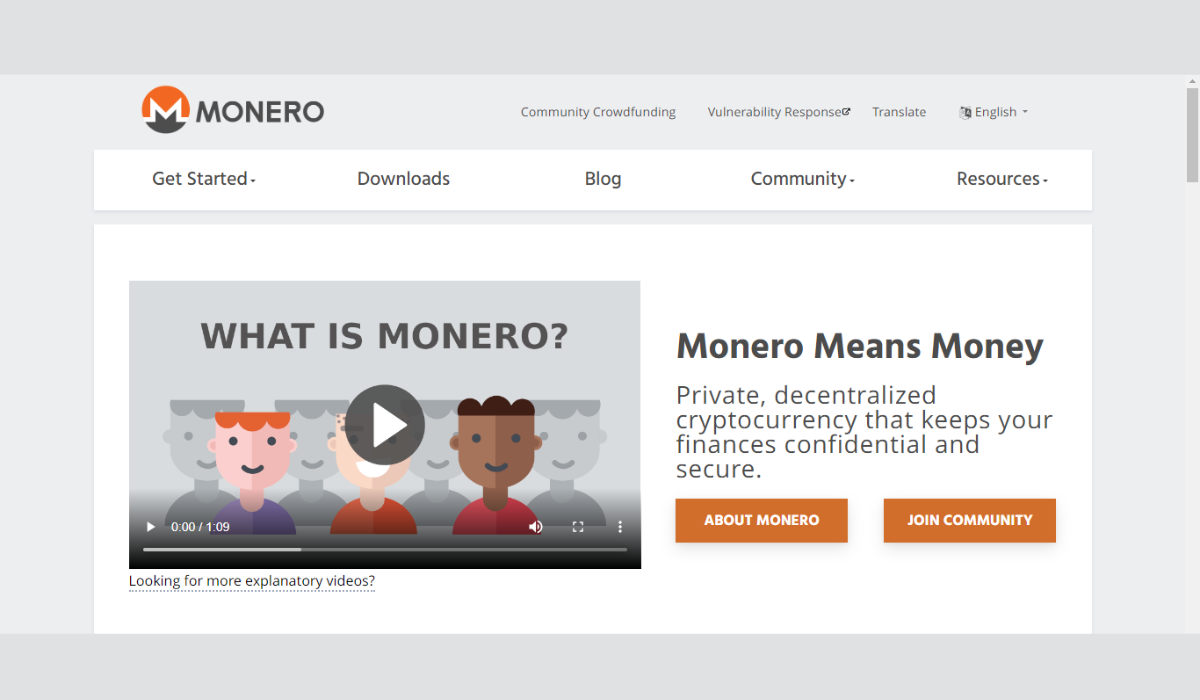 Privacy Weakness is one of the biggest problems of Bitcoin (BTC) and other cryptocurrencies. Although blockchain networks allow users to transfer money anonymously, blockchain users can still obtain the information of the sender and receiver from the public ledger.

It means the companies can blacklist the suspected coins if a transaction is against their terms & condition. Monero is designed to solve this problem by providing privacy in a true sense. It keeps the transaction data hidden from those examining the blockchain.

What is Monero (XMR)?

Monero is a privacy coin that hides transaction data from prying eyes. When a user transfers money through a blockchain network, the details of the sender, the receiver, and the transaction amount are automatically updated on the public ledger. Monero prevents this problem with the help of “ring signatures” technology.

Monero isn’t the only privacy coin there are other options like Zcash that provide the same benefit. But most privacy coins require the privacy feature to be turned on. Whereas Monero has this feature turned on by default. Although Monero got controversial for facilitating the people who commit illicit activities on the dark web, it has many positive uses as well.

That’s why it has become one of the leading cryptocurrencies over the years. Along with privacy, Monero offers several other unique features that make it a better choice than other cryptocurrencies.

Total Privacy – Privacy is one of the most prominent features of this cryptocurrency. It keeps the transaction data hidden from other blockchain users allowing its users to send money anonymously.

Scalability – Unlike Bitcoin and other cryptocurrencies, Monero has the ability to process a huge number of transactions without any delay.

Fungible – Most cryptocurrencies have an open and traceable history. It can be said that Bitcoin and other cryptocurrencies are like fiat currencies because they have a unique code for each coin. Thus, these coins can easily be traced and blacklisted if needed. On the contrary, Monero is like gold that doesn’t have any serial number. Thus, Monero proves to be more fungible as it doesn’t leave any traceable history behind.

Multiple Keys – Most cryptocurrencies have a limited number of public and private keys that are used during transactions. Monero keeps these keys hidden on an extra layer so that no one can figure out how and when the currency is used.

ASIC Resistance – Monero has a unique currency production system that divides the power among multiple players rather than keeping it limited to a few people/groups. Although it works through the Proof-of-Work consensus mechanism, it allows everyone to participate in the mining process through the hashing algorithm. It means that the users don’t need to invest in ASICs to become miners. They can start mining through their PCs and Macs. Thus, the power is distributed among multiple players.

Monero is a hard fork of Bytecoin, a cryptocurrency that was launched in 2012. A hard fork means that the developers have used the key features of Bytecoin with a few differences to introduce a new coin (Monero).

The creators of Monero used pseudo-names to keep their identities hidden. The Bytecoin couldn’t last long because of the allegations that the developers have tampered with the cryptocurrency’s supply. Monero was launched in 2014 with the name “Bitmonero” which was later shortened to Monero.

Monero relies on the donations of its community members from around the globe because it’s an open-source project. It became a leading name in the crypto space when its privacy features were significantly improved in 2017.

How Does Monero Work?

Monero processes transactions through a proof-of-work consensus protocol. The network generates a query when a user requests a transaction. And the miners try to solve this equation to get the reward. Unlike Bitcoin, the users don’t need to install expensive equipment to become a miner. They can connect their PC or Mac to the blockchain network to solve the queries.

Monero stands out among others with its two distinctive features.

It’s like a member of the Government leaks secret information with their ring signature making it impossible to identify the official who has leaked the information. But it can be verified whether the information is leaked by a government official or not.

The process of sending money on the Monero network is similar to other blockchain networks. But it uses three different types of keys to hide the information of the sender and the receiver.

View Key – This type of key is used to find out the transactions that are generated for a particular account.

Private Spend Key – The users can take advantage of this type of key to transfer money to someone on the network.

Public Address – The user needs to give a public address to someone if they want to receive payment in their wallet.

What Are the Use Cases of XMR?

A small portion of the transaction amount is transferred to the miners who participate in the validation process. With a circulating supply of 18 million tokens, Monero has a market cap of $3.7 billion. It’s the 32nd most popular cryptocurrency in terms of market cap.

Monero is a cryptocurrency network designed to facilitate users who want to transfer money anonymously. It uses ring signatures technology to keep the information hidden from the users. It uses three different types of keys to maintain privacy on the network. If you need more information about how Monero works, feel free to get in touch with us.